It had been 16 years since I was last at Kripalu.  Like any reunion, there was a sense of trepidation.  How much had Kripalu changed–would it seem dated? Would I seem dated? Can you go back in time and rediscover the excitement and curiosity that led you there in the first place?

Little did I know, the “Kripalu Experience” would start in the airport shuttle from Albany. My rowmate was named Dana, from Maryland.  Within half an hour, we had exchanged life stories and marveled at how you can have conversations with strangers at Kripalu we can’t have with people back home you’ve known for years.

Checking into my dorm room, my 9 bunkmates started trickling in– Sharon from Connecticut, Lily from  New Jersey (a Macalester alumna!). There was a German national, as well as a younger woman just in from China with major jet lag. At any given time, there are about 600 people staying in the center, plus some in hotels around Stockbridge/Lenox and maybe 10 programs running.  The common thread that binds all participants is the twice daily yoga practices taught by Kripalu staff. In an effort to be more guest friendly, I noticed they moved the morning practice from 6 to a leisurely 6:30!

While eager to meet and greet, we all had to navigate four intense days of programming. We would pair off with the people who selected the same workshops we did or with whom we made a connection.  These connections would be cemented and expanded over some of the healthiest, most flavorful food on the planet in the dining hall. I happened to meet a guy in line for the buffet  (I meet a lot of people in buffet lines) who owns a Kripalu-sanctioned school in the trendy part of Tokyo.  The dining hall exudes a strong college vibe as people are discussing everything from transcendental meditation to how to adapt plank pose for seniors. 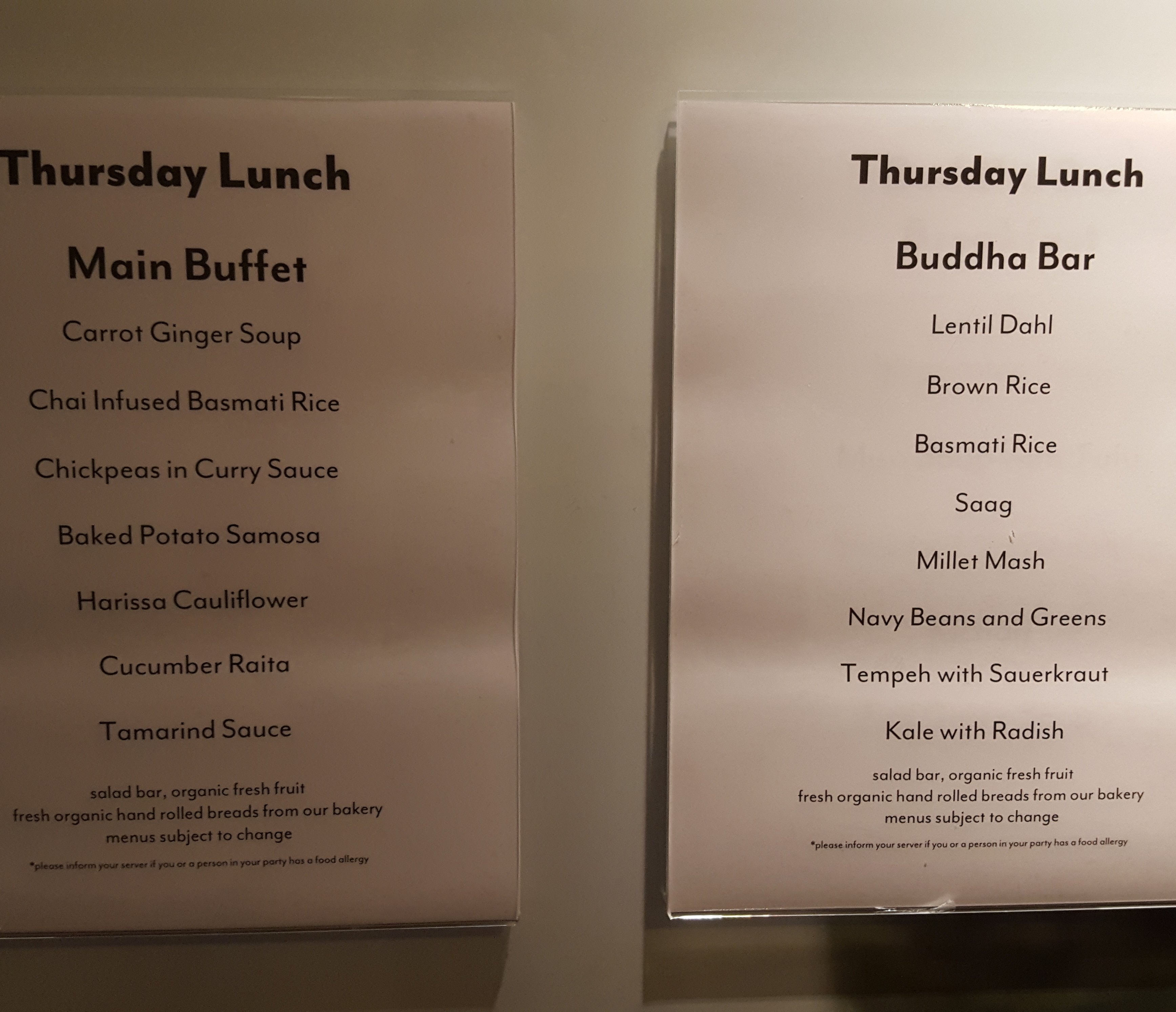 I came to the realization that, as Kripalu teachers, no matter when we attended and the prevailing yoga style of the time, we were all systematically taught how to form healthy connections with our students and each other.  Connection permeates the Kripalu zeitgeist in a way I haven’t experienced elsewhere.

Replacing “guru worship” and Indian notions of caste and male hierarchy was a daunting task taken on by Stephen Cope, who lead the charge to rescue the program when it took a wrong turn in the 1990’s.  Having had a successful psychotherapy practice in Boston in his former life, he was just the man to oversee Kripalu’s transformation. He went on to be Executive Director and is now a “Scholar in Residence” and well-known author.

After a sex scandal involving Swami Kripalu’s chief disciple from India, Cope and his devoted team set out to rebuild Kripalu as a “safe space,” where no one person could build a “cult of personality,” adding plenty of checks and balances. For instance, Teacher Training Programs had co-leaders and numerous assistants.  Imagine the potential for abuse in programs where one person decides whether or not aspiring teachers receive certification? (i.e. Bikram).   You can read all about Kripalu’s rebirth in Cope’s first book,  Yoga and Quest for the True Self. 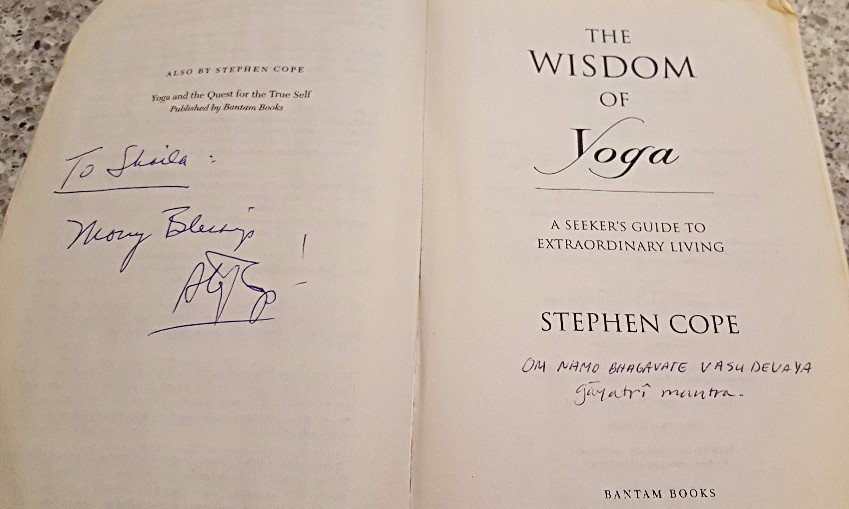 The book Stephen Signed was The Wisdom of Yoga: A Seekers Guide to Extraordinary Living. I presented him w/ my tattered copy and said, “This is the book I live in, so this is the one I want you to sign–yes I have your new one too.” He replied an author couldn’t ask for anything more than that–to have his books “inhabited” by readers!

Giving teachers and students a safe space to undergo the “Quest for the True Self” may be Kripalu’s greatest contribution to Yoga in America by offering the antidote to a popular culture that encourages the relentless pursuit of the material, egotistical, accumulative “False Self.” Back in 2001, my mentor told me, “People do crazy shit for this yoga.”  He then suggested I go out to the parking lot and see the cars packed to the brim with the earthly possessions of people rebooting their lives and getting back to what’s important through Kripalu Yoga. Astonishing!

In comparing the in-house Kripalu staff w/ some of the “outside” presenters at the conference, it dawned on me that, yoga is entering a new era.  What matters most these days seems to be how well you do YouTube videos and how many Instagram followers you have. Sitting through a couple of workshops with this new breed of teacher, many with media backgrounds, I realized what is being lost: the art of connecting to students.  When a YouTube star comes over to give you a hamstring assist while simultaneously promoting her website you just feel more like a prop than a person.

Contrast that to the in-house trained Kripalu staff.  Many have medical degrees (i.e. MD expert on pain management and physical therapy) and have been doing/teaching yoga for decades.  There is a sense that the students become the teacher’s meditation. Moreover, staff are extremely approachable after presentations.  No one is “handling” them, running interference, bringing them water, etc.  Yes, some Kripalu staff are published authors, researchers of note and have appeared in Yoga Journal–one even on the Dr. OZ Show.   The point is: there’s just less …”packaging.”

At Kripalu, they refer to a technique called “holding the space.”  Can you really just sit there in the moment, listen and connect with another person or group of people–without “performing” and calculating what you’re going to say next?  We actually practice it, and, at first, it’s scary.  They team us up with partners and we listen to, in some cases, very troubling life stories, without reacting, analyzing, judging.  Stephen Cope has been facilitating it for decades and we’ve all been through it, several times in our 200-hour training. Perhaps at the time, I wondered what the heck this kind of intense listening had to do with yoga.  Now, I suppose we all know it’s the ultimate yoga, the yoga off the mat. It’s the yoga that keeps you striving for your True Self and not some derivative the world is trying to sell you because you also learn to hear your own voice along the way.   Sure, we can study the latest developments in Down Dog elsewhere, but we can’t immerse ourselves in this nourishing terroir, cultivated as if by magic, in a former Jesuit monastery in the Berkshires.

I enjoyed observing a tightly-knit group of eighty-somethings at the conference; they had been attending year after year and had an amazing camaraderie.  Mary Lou had opened the second yoga studio in her town in the 1990’s.  She had been there when the scandal broke and filled me in during our shuttle ride back to the Albany airport, including the lesser known fact Kripalu had brought in that scoundrel Bikram to advise on sequencing.  I learned there are even mirrors behind the wall coverings in one of the practice rooms (horrors!). I was riveted.  She also praised the strength and determination of the people who picked up the pieces.

Mary Lou admitted she was sick the first day of our conference and wasn’t sure she was going to make it through the week.  Yet, she was hurrying back to train teachers in Charlotte that very evening. 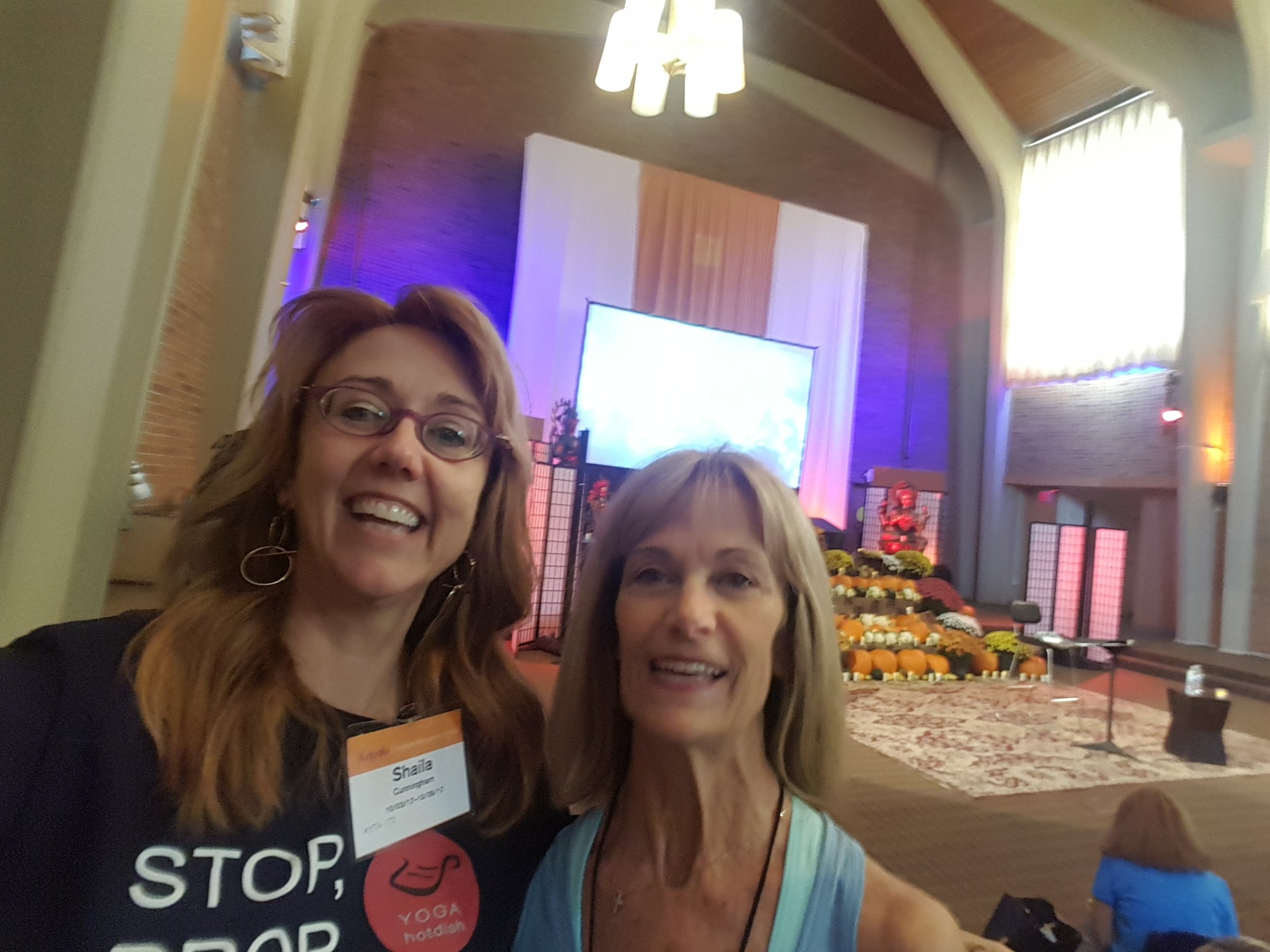 We said our goodbyes and I remember thinking, that’s who I want to be when I grow up.  Passion and purpose can overcome a lot, maybe even old age.

Kripalu is aging gracefully, has made some improvements, updated techniques, but still keeps the original character.  It remains quietly confident, evolving in its own unique way under an ensemble cast of leaders.  They haven’t given in to the narcissism of the global yoga algorithm that dictates everything has to be slick and Instagrammable, but there has certainly been a good sprucing up–decor, brochures, even buffets!

Kripalu has also maintained its own unique brand of spirituality which I can only describe as a “tradition of welcoming all traditions.”  This results in a peculiar secularism.  The idea is, use Kripalu Yoga as a vehicle to be better at what you already are–Christian, Buddhist, Hindu, Agnostic etc.  This draws an interesting international crowd. As a Christian, I can’t imagine limiting myself by only practicing yoga w/ say, other Christians. Maybe it’s my FOMO (Fear of Missing Out).

Perhaps the key to longevity in yoga is to be just commercial and successful enough to move forward on your own terms and to know your niche. Did I appreciate the improved gift shop featuring local designers offering extra long yoga pants?  You bet I did! Did I partake of the newly-added coffee at silent breakfast?   Yes, and I thanked God, Krishna and Jesus for it! Thirty-something Shaila was all-in and ready to give up coffee.  Now I know and accept, coffee is just part of my True Self. 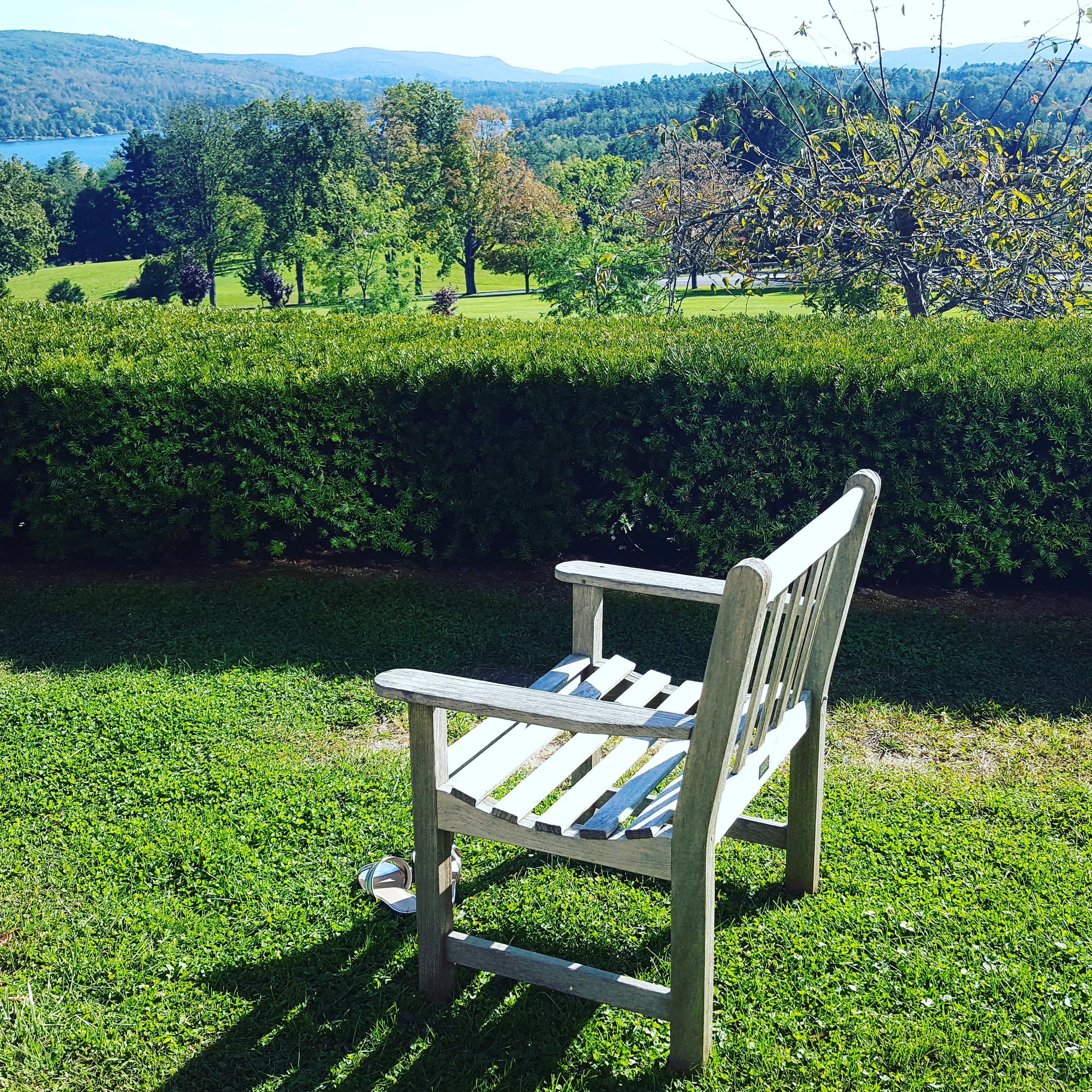 Kripalu’s Back Yard:  A Great Place for a Cup of Coffee!

But They’re On Sale: The Yoga of Pants, Shopping, and Target

Yoga for Your Brain: Tone your nervous system with YogaHotDish

From the Lunch Room to the Board Room: Do Mean Girls Ever Grow Up?

Disher and “Top Doc” Carrie Terrell on Going vs. Not Going to Yoga